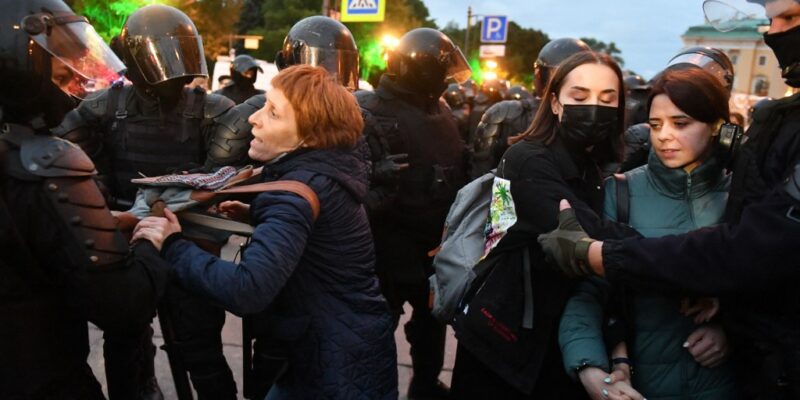 Over 1,300 people, including 18 journalists, were detained across Russia on Wednesday as rallies against a military mobilization declared by President Vladimir Putin for the war in Ukraine took place in 42 cities across the country. The European Federation of Journalists (EFJ) demands the release of these citizens who were demonstrating peacefully as well as the journalists who were covering the demonstrations.

According to the independent OVD-Info police monitor, at least 1,328 people, including 18 journalists identified by the independent Journalists and Media Workers Union (JMWU), have been detained nationwide so far. A majority of those detained were women.

Most of the detained journalists wore Press waistcoats and carried professional press cards. Some of them were quickly released, others were given tickets, which put them at risk of fines and short prison terms. According to OVD-Info, one journalist, Denis Lipa, was beaten in Moscow by police when he showed his press card.

Journalist Artem Krieger, who was broadcasting live for SOTA-Vision, was arrested, charged with obstructing traffic and issued with a summons to the military registration office.

“This is not the first time we have witnessed the police treating journalists covering protests as protesters themselves,” said JMWU office secretary Andrei Jvirblis. “Sometimes this can be explained by the ignorance of police officers, but this time the desire to suppress any information about the protests against the authorities’ policy is obvious. A society deprived of information channels resembles an organism whose pain reflexes are atrophied. Such a situation is fatally dangerous.”

“These targeted arrests of journalists by the police are a massive censorship operation,” said EFJ President Maja Sever. “The Russian authorities are clearly doing everything to hide the wave of protests in Russia. We salute the work of Russian journalists who are taking personal risks to inform the public about the wave of opposition to the war in Ukraine.”

On 21 September, the president announced a mobilisation. In protest, activists launched state-wide anti-war rallies. The police responded with violent suppression, detainment, prosecution, and forceful enlisting of the protesters. pic.twitter.com/qGLraAVJj8