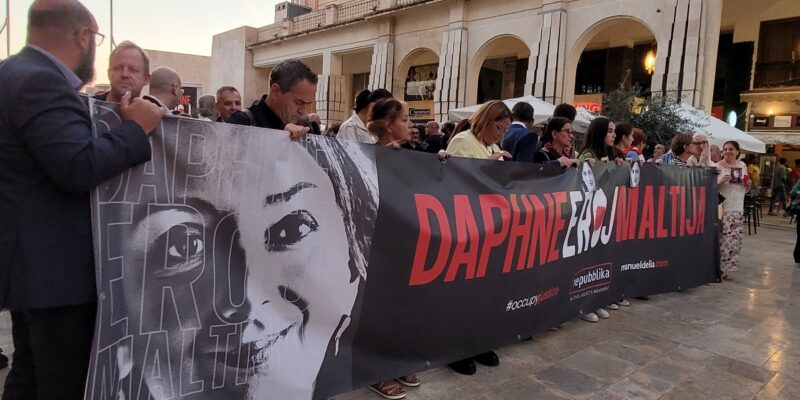 The European and International Federations of Journalists (EFJ-IFJ) welcome the resolution adopted today by the European Parliament to pay tribute to the murdered Maltese journalist Daphne Caruana Galizia and to denounce the lack of political will of the Maltese authorities to fight corruption and guarantee press freedom.

Five years after the assassination of Daphne Caruana Galizia in Bidnija (Malta), the European Parliament pays tribute to the journalist and looks into the rule of law, organised crime, and corruption in Malta.

In its resolution adopted with 564 votes in favour, 10 against (the four Maltese MEPs from the socialist group and six MEPs from the German far-right party AfD), and 17 abstentions on Thursday, the European Parliament acknowledges the progress in ongoing judicial proceedings, and the Maltese Prime Minister’s public apology for the state’s shortcomings that could have contributed to the Daphne Caruana Galizia murder. However, MEPs deeply regret that investigations have led to only three convictions related to the carrying out of her assassination. They insist that everyone involved, at every level, need to be brought to justice, and “the full and continuous involvement of Europol” is needed.

MEPs are also concerned that, one year after its publication, the implementation of the recommendations in the final report of a public inquiry into the killing is deficient, despite a number of reforms put forward by the government. They are appalled by the lack of progress in prosecuting the high-level corruption and money laundering that Daphne Caruana Galizia had been investigating, and are alarmed by the “institutional failure of law enforcement and justice”, including the recent revelations of repeated inaction on European Arrest Warrants. The Parliament voices an array of further concerns, including:

MEPs welcome the additional resources to support investigations and prosecutions, reforms to the appointment procedure for judges and to the Attorney General’s office and role, several government proposals to improve media freedom (which would need, however, to ensure that relevant European and international standards are met), and the amendment of Malta’s Protection of the Whistleblower Act.

The European Parliament has also condemned the criminalisation of, attacks on, and killings of journalists, including those of Ján Kuciak and his fiancée Martina Kušnírová in 2018, of Viktoria Marinova also in 2018, and of George Karaivaz and Peter R. de Vries in 2021.

The EFJ and IFJ recall that 15 journalists have been killed in the EU since 2015 (in Denmark, France, Greece, Malta, The Netherlands, Poland, Slovakia and the UK).