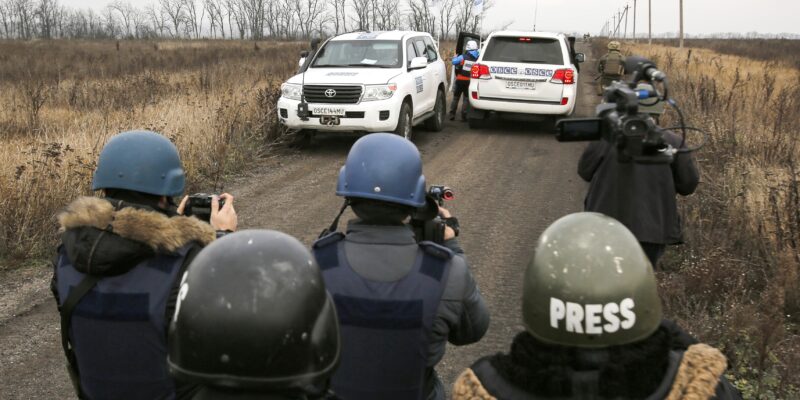 The European Federation of Journalists (EFJ) condemns the establishment of branches of the Russian Union of Journalists (RUJ) in the Ukrainian territories illegally annexed by Russia. The EFJ calls on RUJ to renounce these settlements and reaffirms its solidarity with its Ukrainian affiliates, the journalists’ unions NUJU and IMTUU.

On Monday, the Russian Union of Journalists announced on its website that the organisation’s leadership had decided to establish four new branches in the Ukrainian territories illegally annexed by Russia on 30 September: in Donetsk, Lugansk, Zaporizhzhia and Kherson. The RUJ statement said that this was the main decision taken by the union’s Secretariat on Monday. In the near future, when the statutes of the new branches are approved, the number of RUJ regional branches will be increased to 89, the statement said.

The President of NUJU, Sergiy Tomilenko, and the President of IMTUU, Serhiy Shturhetsky, immediately condemned these settlements: “Donetsk, Lugansk, Kherson and Zaporizhzhia regions are Ukrainian territories. Branches of the National Union of Journalists of Ukraine and the Independent Media Trade Union of Ukraine have long been established and functioning in these regions. The creation of RUJ`s branches on the territory of Ukraine is a serious violation of international law and an interference in the sphere of activity of NUJU and IMTUU”.

“These settlements look like a provocation we could have done without,” says EFJ President Maja Sever. “I can understand that the Russian Union of Journalists has had to intervene to support journalists in difficulty in the occupied Ukrainian territories, but there was no reason to go so far as to establish four new RUJ branches in these Ukrainian regions illegally annexed by Russia. By doing so, RUJ is actively participating in the Kremlin’s policy of Russification of the occupied regions. Journalists of the newly-annexed territories will have to decide between accepting the new leaders and their organisations, or resisting it, risking their lives”.

Today, the EFJ General Secretary, Ricardo Gutiérrez, denounced the RUJ settlements in occupied Ukraine at the meeting of the Executive Committee of the European Trade Union Confederation (ETUC), which was discussing the situation in Ukraine: “Trade unions must be at the service of the workers and not serve the political interests and imperialist impulses of governments”.

In June 2022, the EFJ General Meeting adopted in Izmir (Turkey) a motion, tabled by the National Union of Journalists (NUJ, UK and Ireland), which condemned Russia’s unprovoked invasion of Ukraine: “Destructive propaganda, misinformation and incitement to hatred against Ukrainians have been part of Putin’s strategy, along with the deployment of tanks, missiles, planes and military units near the border with Ukraine. (…) The Russian media has, for the most part, played a supportive role to Putin’s invasion, justifying military actions, under-reporting atrocities, and dishonestly portraying events in Ukraine as a ‘special military operation’.”