Four journalists killed in Europe in 2018 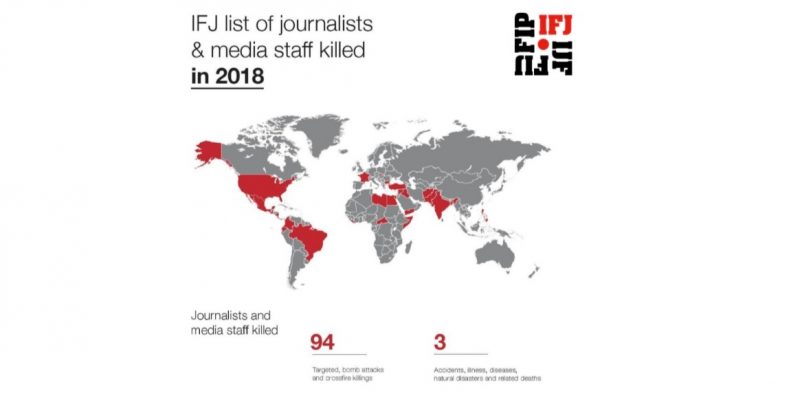 
The International Federation of Journalists (IFJ) today published a list of 94 journalists and media staff killed in work-related incidents during 2018. The new death toll marks a slight increase up from 82 killings recorded last year and represents a reversal of the downward trend from the last three years. In Europe, four journalists have been killed in 2018: Jan Kuciak (Slovakia), Jamal Kashoggi (Turkey), Victoria Marinova (Bulgaria), and Antonio Megalizzi (France). The list does not include the Russian journalist Maksim Borodin who died in suspicious circumstances in Ekaterinburg (Russia).

In its 29th list, the IFJ says that this year’s roll call of loss of lives to violence includes 84 journalists, cameramen, fixers and technicians who died in targeted killings, bomb attacks and cross fire incidents. Ten other media staff members who worked as drivers, protection officers and a sales assistant also lost their lives. There are six women among the 94 victims. There were also three work-related accidental deaths.

The IFJ list for 2018 paints a situation of on-going safety crisis in journalism, which was highlighted by the cruel murder of the Washington Post columnist and Saudi national, Jamal Khashoggi, who was killed in the Saudi consulate in Istanbul on 2 October. This was the latest in a series of devastating attacks on media professionals, including the multiple bomb attacks which turned Afghanistan into a killing zone for journalists and the reign of violence by organised crime in Mexico which remains firmly trained on journalists.

“These brazen acts of violence in utter disregard to human life have brought to an abrupt end the short lived decrease in journalists’ killings recorded over the last three years,” said IFJ President Philippe Leruth. “Once again, the IFJ is asking United Nations’ Members States to adopt at  their general Assembly the Convention on the security and protection of journalists which the IFJ presented to diplomatic missions at the UN in New York last October. This Convention, supported by the profession as a whole, is a concrete response to crimes committed against journalists in full impunity.”

In another worrying development, the list includes five journalists and media personnel of Capital Gazette, a daily published in Annapolis, the capital of US state of Maryland were gunned down by a disgruntled individual who had lost a defamation case against the publication in what police described as a ‘ deliberate attack.’

According to the IFJ list for 2018, armed conflict and militant extremism account for most journalists’ killings in countries like Afghanistan, Syria and Yemen, while there was a steep drop in violence against journalists in Iraq last year since armed groups lost ground in the country. But there were other factors such as the increasing intolerance to independent reporting, populism, rampant corruption and crime as well as the breakdown of law and order afflicting countries in so-called peace time like India, Pakistan and the Philippines.

These factors contribute to perpetuating an environment in which, consistently, there are more journalists killed for covering their communities, cities and countries than for reporting in armed zones.

“The numbers on this list are a sad reminder that the safety of journalists will remain elusive as long as countries boasting institutions which should be enforcing the law but have been paralysed by corruption and incompetence in the face of unrelenting assault on journalism,” added IFJ General Secretary Anthony Bellanger. “As such, they stand as a damning indictment of the authorities for their failure to uphold the journalists’ right to their physical safety and to guarantee an informed public discourse in a democracy.”

According to IFJ records for 2018, the Asia Pacific has the highest killing tally with 32, followed by the Americas on 27 killings, the Middle East and the Arab World recording 20. Africa comes fourth with eleven killings before Europe on four.