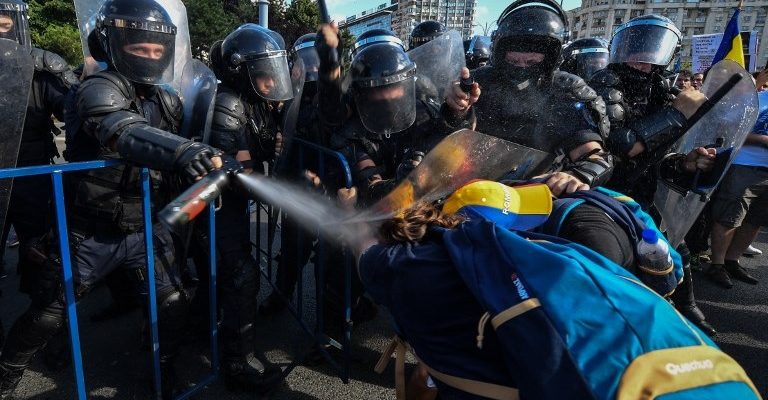 
The European Federation of Journalists (EFJ) together with Media Freedom Rapid Response (MFRR) partners have raised further concerns about continued violence against journalists covering protests and demonstrations across European Union (EU) Member States and Candidates in 2020. The group calls for increased protection, police training and oversight, as well as broader respect for media freedom.

In the first six months of the year, MFRR partners have documented over 31 separate cases of attacks and media freedom violations against at least 41 different journalists and media workers reporting from protests and demonstrations in 11 EU Member States and Candidate Countries.

The figures, documented on the Mapping Media Freedom platform, illustrate the increasing threats posed to journalist’s safety and media freedom by heavy handed police and security forces, extremist political groups and violent members of the public.

While many of the violations documented in 2020 were linked to the COVID-19 pandemic, media professionals and press workers also faced threats while documenting far-right rallies, Black Lives Matter demonstrations and protests about sensitive topics such as the European migrant crisis.

In light of the continued attacks, the undersigned organisations call on European institutions and national authorities to guarantee the safety and protection of media professionals during demonstrations and protests and to ensure all reported violations are thoroughly investigated.

MFRR partners also already set out a list of recommendations for national authorities and police officers, journalists, media workers and media outlets and protest or demonstration organisers [see below].

During the coronavirus pandemic, journalists reporting from the scene of anti-lockdown or anti-government protests have faced pressures from both protesters and police.

Other protests and demonstrations

As MFRR partners previously highlighted, these attacks against journalists and media workers at protests have come from a number of sources, including participants of the protests, activist groups or police officers deployed to maintain public safety.

Police across Europe continue to deploy increasingly militarised tactics when responding to protest movements, including the use of non-fatal firearms, tear gas and aggressive crowd dispersal tactics. In many cases, even when journalists and media workers are clearly identified, they have been attacked as part of the police’s response to the protest in general.

The right to free assembly and association is a vital underpinning of a modern and pluralist democracy and has itself come under significant threat across Europe. However, threats against the press and media further weakens their ability to cover demonstrations and to inform the public accordingly.

When media workers are attacked, threatened or unlawfully detained, full, independent and robust investigations are vital to ensure that journalists and media workers are able to continue working, others are not threatened into silence and the public can be informed about the public movements or protests demanding change, both in their native country and across Europe.

Recommendations for protest or demonstration organisers: