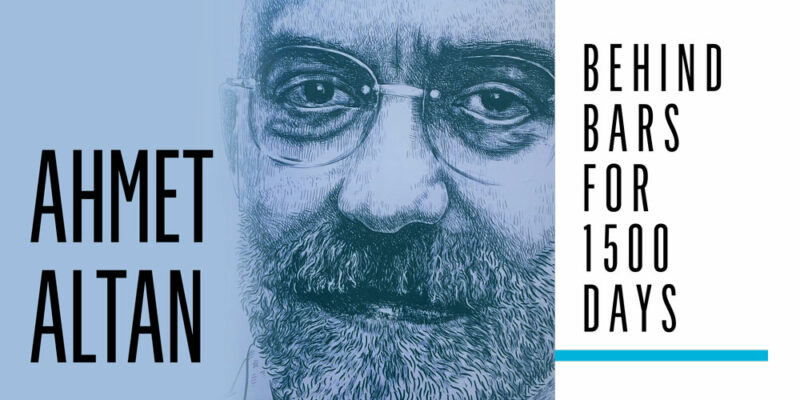 
Turkish journalist Ahmet Altan is 70 years old. He has spent the last four years in a cell in Turkey, apart from one parenthesis – a mockery of 8 days of freedom in November 2019 – when a criminal court ordered his release. 1500 days, today, behind bars without having committed any offence, and amid reports of increased Covid-19 risk in the prison facility where he is held. The European Federation of Journalists (EFJ) and its partners, including Articolo 21 and P24, demand his immediate release.

Throughout his trial, Ahmet Altan faced absurd, unfounded and ever-changing charges relating to “attempting a coup d’état” and “terrorism.” Altan is currently serving a sentence of 10 and a half years in prison for “helping a terrorist organization without being a member”.

His ‘guilt’: being a free writer and an intellectual with a straight back. Ahmet has never bowed to the logic of the Turkish regime which imposes the gag on the independent press.

The persecution of Ahmet continues but he remains free, flying on the wings of his mind.

Altan was arrested for the first time on 12 September 2016 for “sending subliminal messages evocative of coup d’état” and, after spending 12 days in pre-trial detention, was imprisoned awaiting trial on charges of “attempting to overthrow the government of Turkey” and “belonging to a terrorist organization”.

In the more than four years since then, first the bizarre charge of “sending subliminal messages” disappeared silently. And then various charges related to the coup, which led to a guilty verdict and aggravated life sentence, were abandoned. Altan was literally persecuted by Turkish justice.

After the Court of Cassation had ruled against his conviction, the 26th High Criminal Court of Istanbul opened a new trial, which led to a conviction on a minor charge of “aiding and abetting a terrorist organisation without being a member” and an exceptionally severe sentence for this charge – 10 years and 6 months in prison. The court also ordered his release pending the outcome of the appeal. Yet, Ahmet was arrested again on 12 November 2019 after the prosecutor opposed his release after the verdict.

Altan’s case has been pending for a year before the Court of Cassation for a review of his last conviction. His application to the European Court of Human Rights, made almost four years ago, has yet to be considered.

Today, on the day that Ahmet Altan’s ordeal marks 1,500 days, we are appealing for his immediate and unconditional release, as he is a prisoner of conscience imprisoned solely for exercising his right to freedom of expression, an appeal that extends to the 73 other journalists still unjustly detained in Turkey.