Human Rights Commissioner: “It is high time for Hungary to restore journalistic and media freedoms” 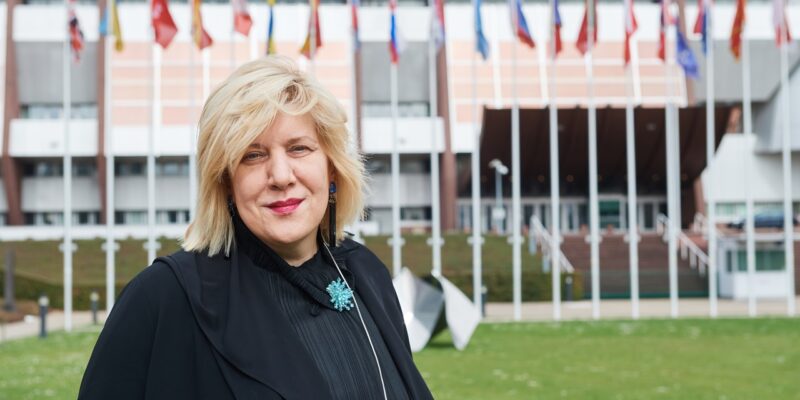 The Council of Europe Commissioner for Human Rights, Dunja Mijatović, has called on the Hungarian authorities today to restore journalistic and media freedoms.The European Federation of Journalists (EFJ) welcomes the Commissioner’s call and demands the EU to investigate the process of state capture of media in Hungary.

“The combined effects of a politically controlled media regulatory authority and distortionary state intervention in the media market have eroded media pluralism and freedom of expression in Hungary”, said Dunja Mijatović, in a Memorandum published today.

Since 2010, the Hungarian government has systematically undermined independent and professional journalism, thus curtailing the free exchange of diverse opinions, particularly outside the capital. The Commissioner is worried and alarmed by the sustained smear campaigns against human rights defenders and investigative journalists, which are carried out with the aim of stifling civil society and sending a clear message that there will be prompt retaliation against any form of criticism of the government. The Hungarian government has also failed to recognise the important role of independent institutions, whether regulatory authorities or the judiciary. “By repeatedly disregarding the judgments of national and international courts, the government has demonstrated that it has no intention of adhering to the rule of law, which is an essential precondition for freedom of expression”, said the Commissioner.

Opaque processes of distributing state advertising revenues based on political allegiances and the vast discretion of the Hungarian Media Council, whose members are all chosen by the ruling party, have dismantled the level playing field for the media and curbed freedom of expression in Hungary. The effects are noticeable across Hungarian society, including in relation to academic freedoms and culture. The Commissioner also stresses the lack of accountability and professionalism in the public service and pro-government media, and the growing obstructionism and targeted interference with the work of the independent media and investigative journalists. “The situation deteriorated further in 2020 due to successive emergency rules. This has led to a striking chilling effect on judges and public officials, on civil society organisations engaged in the defence of human rights, and on marginalised groups”, she said.

To reverse the situation, the media legislation must be amended to divide the excessive powers of the President of the Media Authority between several autonomous bodies and limit the discretion of the Media Council. “Hungary needs to comply in law and in practice with Council of Europe standards on media pluralism and show due regard for the editorial independence of all public and private media”, said the Commissioner.

She further calls on the Hungarian authorities to recognise the threat hate speech against journalists represents to society as a whole, to condemn publicly all incidents of it, and to put an end to the spread of smear campaigns and misinformation about civil society organisations, human rights defenders and those who criticise the government.