WPFD: Safety4Journalists Survey – Have your say! 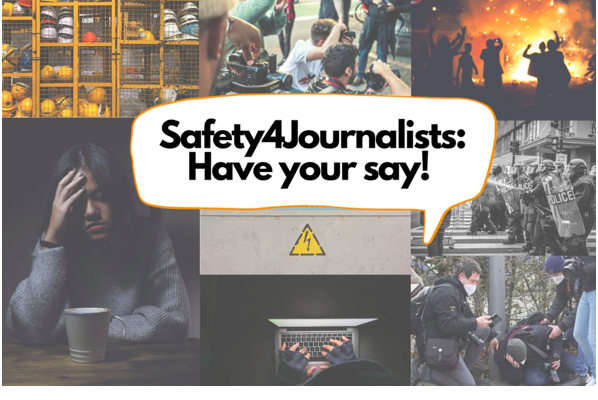 
The European Federation of Journalists (EFJ) has launched a European survey on 3 May, World Press Freedom Day, as part of a wider campaign to push for a safer and healthier working environment for journalists.

“The safety of journalists has been in the spotlight in recent years as a record attacks on journalists are being made, sometimes even resulting in deaths,” says Ricardo Gutiérrez, EFJ General Secretary.

“The well-being and safety of journalists has long been neglected in the pursue of 24-hour speedy news. It is time to fulfil our duty of care for journalists’ both physical and mental health.”

Often, journalists are taking their own risks and putting the stories first before their own health and safety. While individual journalists should be more aware of the risks they take, media employers have a major role in providing a safe and secure environment for their journalists and help them mitigate risks with comprehensive security measures and policies in place.

In this context, the survey aims to investigate how journalists perceive threats to their physical safety and security, mental health, and what measures they perceive to be effective in mitigating these threats, as well as the roles and responsibility of media employers and journalists’ organisations. The survey will be distributed to all journalists in Europe. The EFJ called on its members to encourage their journalists to respond to the survey.

“The misconception that ‘the job comes with its risks’ is not acceptable. We should take action before something terrible happens to journalists like many who had lost their lives due to their work. We all have a duty in creating a safe environment and culture for our journalists, ” emphasised Gutiérrez.

The results from the survey will be analysed and used to map out the health and safety needs of journalists. It will eventually contribute to the safety training courses that will be developed by the EFJ and its partner organisations in the project to support journalists.

As part of the project co-funded by the European Commission, the EFJ will develop an online risk assessment platform, a free tool for journalists to conduct their own risk assessment when conducting assignment. A series of online modules containing security expert advices and practical tips on common security challenges (i.e. covering protests, investigative journalism, sexual harassment, digital security, mental health) will be offered to journalists.

For more information about the project, please visit our project page.

The survey is available in English, French, German and Croatian. It is limited for journalists in Europe (including countries in the Council of Europe). Please click the respective links below to submit your response.

The French version will be available soon.