Belarus: release Roman Protasevich and all other political prisoners 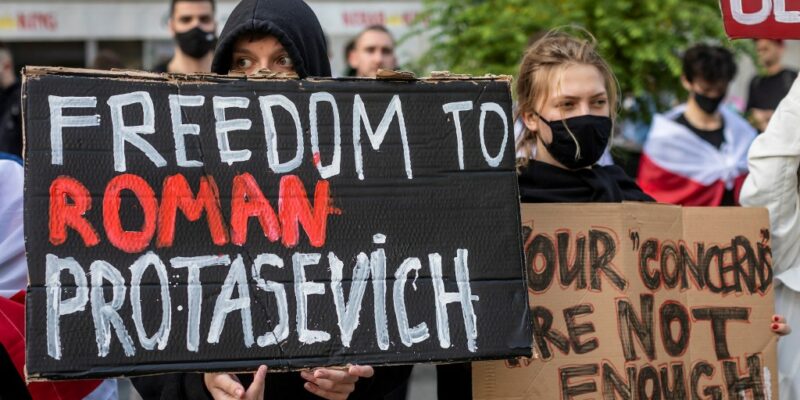 This statement was originally published on baj.by on 24 May 2021.

On May 23, blogger Raman Pratasevich was detained by Belarusian security forces at the Minsk National Airport, following the forced landing of a Ryanair passenger airliner.

Based on this, the blogger was included in the national database of terrorists and put on an international wanted list. A request for his extradition was sent by the Belarusian authorities to the Polish government.

It is also known that Sofia Sapega, a student of the European Humanities University, was arbitrarily detained together with Raman Pratasevich.

In this regard, we, representatives of Belarusian human rights organizations, note the following:

Blogger Raman Pratasevich is being persecuted by the Belarusian authorities against the backdrop of a profound human rights crisis, triggered by the launch of the presidential election last May and continuing to this day. The crisis is accompanied by unprecedented political repression against thousands of individuals from every social group. All of them are united by sharing dissenting views on the development of the country, demanding fair elections and human rights for all citizens of Belarus without exception.

Raman Pratasevich’s public activity is nothing but the peaceful exercise of the freedoms guaranteed by both the Constitution of the Republic of Belarus and international human rights law, the freedom to seek and disseminate information and to express one’s opinion, among others.

According to international standards of freedom of expression, no one may be subjected to any kind of restriction, including deprivation of their rights or penalties due to their own opinions or beliefs.

A person may be punished for expressing their opinion, in case it threatens national security, provided that the government can demonstrate:

As we have repeatedly noted, the spontaneous gatherings that began after the presidential election of August 8, 2020 were mostly peaceful and were not accompanied by actions that could be described as riots.

The accusation of Raman Pratasevich of inciting social discord against government officials, police officers and other officials is, in our opinion, nothing but persecution for criticizing the current government. Article 130 of the Criminal Code is intended primarily to protect vulnerable groups of society from inciting hatred, rather than government officials from criticism, however harsh it may be. We have repeatedly clarified that government officials are not a separate social group.

In addition, according to international standards on freedom of expression, it is inadmissible to punish for criticism or insult of a nation, state or its symbols, government, state institutions or state and public figures, unless such criticism or insults are aimed at inciting violence or can trigger such actions.

In this regard, we consider the persecution of Raman Pratasevich to be politically motivated, as it is related to the peaceful exercise of his opinion, and the detainee is therefore a political prisoner, in accordance with paragraph 3.1 (a) of the Guidelines on the Definition of Political Prisoners.

We call on the Belarusian authorities to: