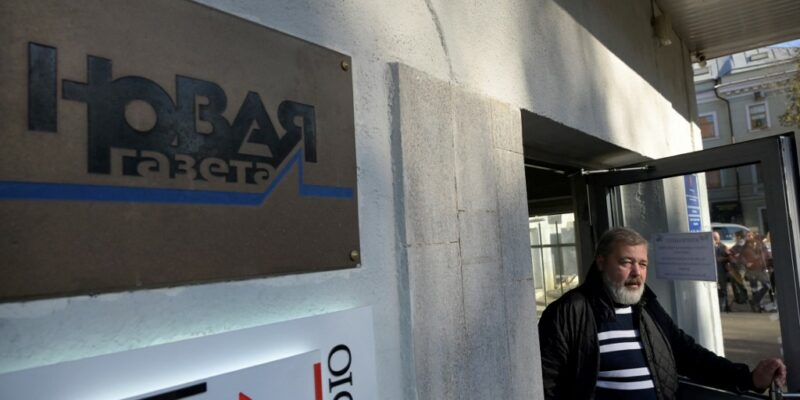 Russia’s Novaya Gazeta newspaper, whose editor Dmitry Muratov was a co-winner of last year’s Nobel Peace Prize, announced on Monday it will cease online and print operations until the end of the war in Ukraine after it received a second warning from the state media regulator RKN for allegedly violating the country’s “foreign agent” law. The European Federation of Journalists (EFJ) calls once again on the Russian authorities to stop the spiral of censorship and the eradication of independent media in Russia.

The warning came a day after Dmitry Muratov spoke with the Ukrainian president, Volodymyr Zelenskiy, in a group interview with Russian journalists that was quickly banned by the state media watchdog, Roskomnadzor (RKN).

“We are suspending the publication of the newspaper on our website, social media networks and in print until the end of the ‘special operation on Ukraine’s territory’,” the paper wrote on its website. Muratov said the decision was difficult but necessary: “There is no other choice… For us, and I know, for you, it’s an awful and difficult decision.”

Novaya Gazeta is one of the country’s most important independent publications. Six of its journalists, including Anna Politkovkaya, have been killed since the 1990s in retaliation for their reporting.

Novaya Gazeta’s announcement follows the closure earlier this month of radio station Ekho Moskvy and TV Dozhd. In addition, on Monday, the Russian justice ministry added Germany’s Deutsche Welle to a list of media organisations it has labelled as “foreign agents”.

“The Kremlin is trying to cover up the Russian army’s war crimes in Ukraine by all means,” said EFJ General Secretary Ricardo Gutiérrez. “Radical censorship prevents the independent Russian press from doing its job in Russia. And deliberate and targeted attacks on journalists covering the war in Ukraine are deterring war correspondents from doing their job. The Russian government and the Russian military want to eradicate press freedom in order to better manipulate public opinion. Together with the ETUC, the EFJ demands that the European Union Member States increase the pressure on Putin and his government through all necessary forms of sanctions, to be specifically targeted on the interests and assets of the Russian leadership and elites”.

Terrible news: one of the last beacons of good journalism in #Russia, @novaya_gazeta, led by Nobel Prize winner #DmitryMuratov, had to decide to suspend its activities until the end of Russia's invasion of #Ukraine, due to laws & practices that continue to suppress #mediafreedom. pic.twitter.com/Rk3CPNQkTT