Malta: what is Prime Minister Abela afraid of? 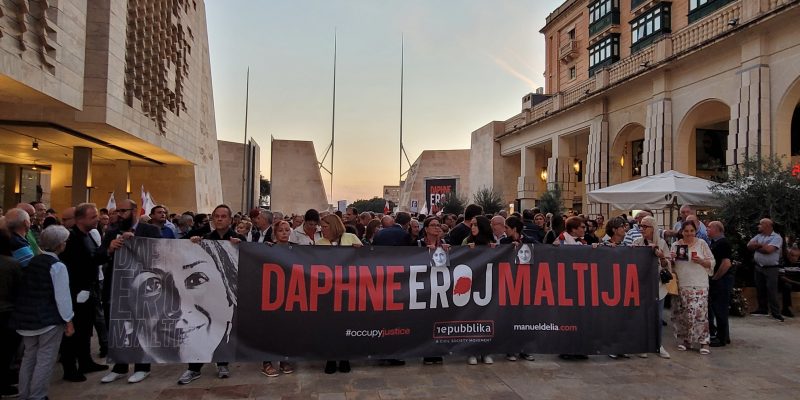 The EFJ General Secretary Ricardo Gutiérrez took part in a four-day international mission to Malta to commemorate the brutal murder of Maltese journalist Daphne Caruana Galizia just five years ago on 16 October 2017. He gives a bitter testimony, considering the guilty passivity of the Maltese authorities.

I was in Malta to pay tribute to the journalist Daphne Caruana Galizia, murdered just five years ago. On Friday, I attended the trial that resulted in the conviction of the two henchmen who killed her. I attended the silent gathering on Sunday at the site where her car bomb exploded. I shouted with the crowd for justice and truth at the memorial march through the streets of Valletta on Sunday evening. What I remember from all these moments is the total disregard of the Maltese government, which still does not take the necessary measures to guarantee press freedom and ensure the protection of journalists.

The international delegation of journalists’ organisations and freedom of expression NGOs (EFJ, ECPMF, IPI, Article19, RSF) was received by Labour Prime Minister Robert Abela last year. In response to the murder of Maltese journalist Daphne Caruana Galizia, he promised to follow up on the media law reforms proposed by the public inquiry that established the responsibility of the Maltese state.

One year later, we are disappointed: the Prime Minister has tabled three bills that are totally inadequate by European legal standards, but above all, he continues to refuse to associate himself with any public act commemorating the murdered journalist. He also refused to receive our delegation this year.

The courage and determination of our Maltese affiliate, the Institute of Maltese Journalists (IGM), forced Mr. Abela to “freeze” the current legislative process last Thursday: the three draft laws will be submitted to public consultation, which the government had not foreseen, so accustomed is it to operating in opacity and secrecy.

During the many meetings scheduled as part of our mission, we learned that the government has commissioned a private law firm to draw up a report on the reform of the law on access to information (FOI). This report has been kept secret since the beginning of the year, and the government has not yet initiated any public consultation process on this reform.

Everything is the same in Malta. The situation is very serious, but the government is reluctant to undertake the necessary democratic reforms in a transparent and participatory manner.

I am obsessed with a nagging question: why is the Maltese government refusing to provide journalists with the working conditions and institutional protection that would allow them to fully perform their function as watchdogs? What is Mr Abela afraid of? What does he have to hide?

Once again, we call on all international institutions, starting with the European Union, the Council of Europe and the OSCE, to keep up the pressure on the Maltese authorities, who have clearly chosen to flout the rule of law.

Mr Abela may well have declared, with his heart on his sleeve, on Sunday that the reforms he has initiated are the best proof of his determination to bring justice to Daphne Caruana Galizia. The EFJ, its international partners and its Maltese affiliates, IGM, are here to tell him that these legislative proposals are totally insufficient in view of the situation. These so-called “advances” are an insult to the memory of Daphne Caruana Galizia.

If Mr Abela were really sincere, he would have fully implemented the recommendations of civil society, journalists’ organisations and inter-governmental organisations.

A sign of the Maltese government's contempt: once again, several states participated in the commemoration of #DaphneCaruanaGalizia's assassination via their diplomatic representation (Netherlands, France, Germany, UK, US…). But no Maltese official. pic.twitter.com/qkMKyeVkHN