Belarus: send a letter to journalists in prison 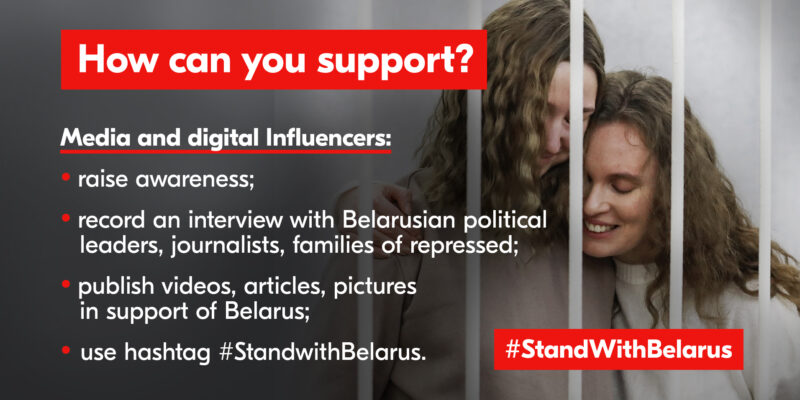 27 November marks the Global Day of Solidarity with Belarusian Political Prisoners. The number of political prisoners in Belarus is growing with now near 1,450; up from 1,000 in February. The war in Ukraine and solidarity of Belarusians and civil society with Ukraine grant new reasons for the Lukashenka’s regime to target ordinary civilians and journalists.

The EFJ and BAJ raise concern about the staggering number of those imprisoned under extreme and trumped up charges. There are currently 32 journalists in prison, some of whom have received very heavy sentences, just for doing their job. This is the case of journalists Ales Lubyanchuk, Sergei Satsuk, Denis Ivashin, Iryna Slaunikava, Katsiaryna Andreeva and Aliaksandr Ivulin.

According to EUvsDisinfo, in recent months, the Belarusian regime has added around 1,000 new names to its list of alleged “extremists”. Around 1,900 individuals are on the list, managed by the Ministry of Interior, as of late November.

The ‘terrorist’ list has around 1,000 individuals. People already arrested and imprisoned on political grounds are added to this list. Authorities recently added two journalists from Tut.by, the largest online independent media outlet in Belarus, to the “terrorist” list. They are Liudmila Chekina, the outlet’s former director general, jailed since May 2021, and Maryna Zolatava, the former editor-in-chief. Four other former Tut.by employees are also on the list.

The Belarusian regime added the website of the Belarusian Investigative Center, the leading investigate journalism initiative, to a list of banned websites in Belarus. Aksana Kolb, chief editor of the Novy Chas (New Time) newspaper, is also among the new additions.

The EFJ and BAJ once again call on the international community to increase pressure on the Belarusian dictator’s regime to end its fierce repression.