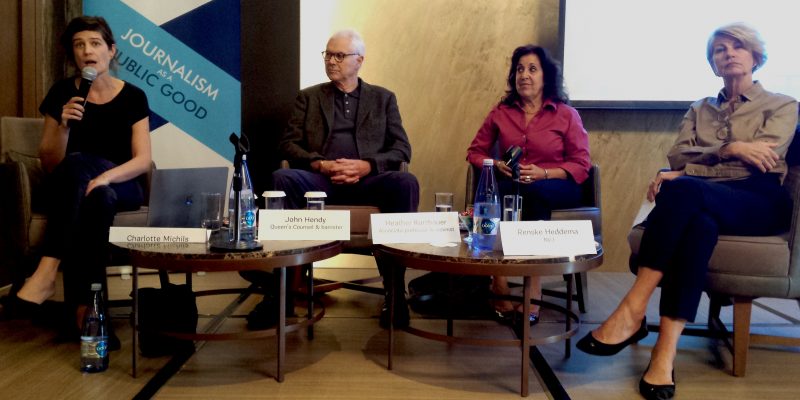 
More than 60 participants from 23 European countries attended the final conference on ‘how to manage change in the media’ from the unions’ and newsrooms’ perspectives. It took place in Thessaloniki, Greece, on 10-11 October 2019.

Co-organised by the European Federation of Journalists (EFJ) and its affiliate in Thessaloniki, the Journalists’ Union of Macedonia and Thrace Daily Newspapers (ESIEMTH), the conference concluded a two-year project (2017-2019) whose objective was to help journalists’ organisations in adapting practices to the news industry and in strengthening their union capacity, through a series of five workshops (see below).

The exchange of best practices and knowledge between EFJ affiliates and partners’ organisations, including social partners, was at the heart of the project. “It is only in the European context that we will manage to address the topic of our conference,” said ESIEMTH President Nikos Karras in his introductory speech. It is not enough to be able to manage change, we have to be the conveyor of the change,” he added.

Throughout the project, affiliates was offered the possibility to organise five exchanges of expertise between the unions: on authors’ rights, EU project management, freelancers and collective bargaining. Feedback showed that such solution-oriented program was very valuable in terms of knowledge sharing.

During the conference, successful practices were shared on media business models, organising young journalists and collective actions, online safety of female journalists and gender equality and diversity in the workplace. Alexandra Borchardt in her key-note presentation focused on the challenge and urgency of more diversity in the newsroom, addressed the issue of burn-out and talent shortage in local media. Barbara Trionfi, Executive Director of the International Press Center (IPI) outlined measures and tools for journalists and newsrooms to counter online harassment and mentioned some best practices.

"Sexism as become a tool. Journalism is the target"
Listening to @barbara_trionfi at the #changeinmedia event organised by the @EFJEUROPE
Panel on "How can media and unions tackle sexual harassment and promote gender equality in the media? pic.twitter.com/O2QO4aNnKf

A focus was put on the young generation of unionists and journalists in a panel with two Greek journalism students. How do they perceive unions and what do they expect from them? ‘More inclusiveness and representativeness, less ideology’ were among the advices given by the future journalists. The lack of knowledge about the labour rights was also mentioned by young journalists who called on unions to reach out to students at the universities.

Debate: should journalists' unions focus on labour rights or on offering sevices to affiliates?#ChangeInMedia pic.twitter.com/T2x7RLYj10

Concrete solutions were also offered to tackle the problem of EU competition law failing to protect freelancers. “We, freelance journalists, are seen as big companies forming cartels,” said Renske Heddema from the Dutch Journalists’ Union (NVJ). As self-employed journalists fall under the notion of ‘undertakings’ which prevent them from bargaining collectively. “You need to challenge in national and European courts the notions of ‘undertaking’ and ‘workers’,” said John Hendy, employment law barrister from the United Kingdom.

Despite the EU legal loopholes, the European Commission is doing more and more to improve media freedom and its ecosystem. Three legislations were adopted in the last years (directives on the Audiovisual Media Service, Copyright and Whistleblowers) and for the very first time, 61 millions euros will be dedicated to media from 2021 to 2027. EU representatives from the Parliament and the Commission presented their next actions for more pluralism, media ownership transparency and media freedom violations monitoring.

I learned how very committed journalists' unions of @EFJEUROPE are and how dramaric the situation of 'journalists as coal miners' is! Suzanne Vanderzande @MediaEu #ChangeinMedia

The project will be followed up by a two-year program on “Journalism and Trust” starting in January 2020 and addressing the topics of training, protection of photojournalists, the implementation of the Copyright directive and of the European Pillar of Social Rights, the fight against disinformation and advancing gender and diversity within and outside unions.

Read more about all the best practices collected throughout the project on the EFJ website and on Twitter (#ChangeinMedia):