Amidst escalating crackdown, international community must stand with the people of Belarus 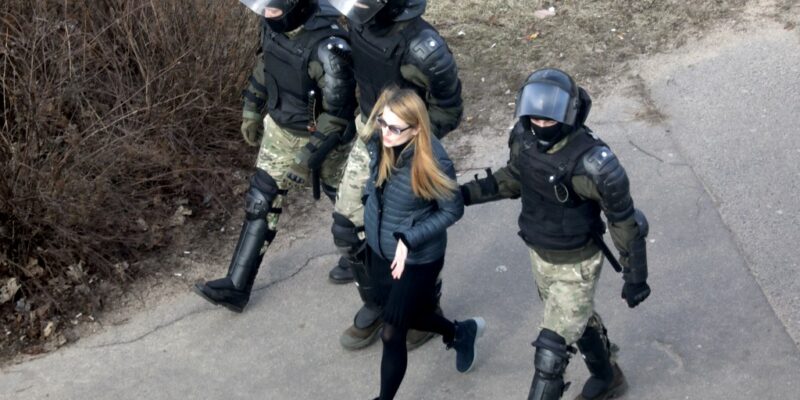 The international community needs to urgently show solidarity with all Belarusian individuals and organisations struggling for their basic human rights, often at great cost to their own lives and livelihoods. The Belarus government’s escalating crackdown must be met with intensified international efforts to pressure the Lukašenka administration to change course and respect the human rights of the Belarusian people.

We, the undersigned organisations, firmly condemn the Belarusian government’s rapidly escalating crackdown on Belarusian civil society and its increasingly brazen abuses of the Belarusian people’s right to freedom of expression and information.

We further call on officials of the European Union, Council of Europe, Organization for Security and Cooperation in Europe, and the United Nations to step up their use of diplomatic and economic levers to pressure the Belarusian authorities to reverse course and to respect the Belarusian people’s human right to freedom of expression and information, including freedom of the press and cultural freedoms.

Since the August 2020 presidential election, the authorities under President Aliaksandr Lukašenka have detained tens of thousands of peaceful protestors. According to the Belarusian Association of Journalists (BAJ), the authorities have also blocked more than 100 news and media websites, and forced 10 publications to stop publishing.

To date, BAJ has recorded the arrests of 497 journalists and media workers; 29 are still in detention. There have also been 68 cases of physical violence against journalists resulting in injury. A recent report by Reporters Without Borders and the World Organisation Against Torture describes systematic government repression aimed at silencing journalists.

Over the past month, the authorities’ onslaught on Belarusian civil society has dramatically intensified. In mid-July, Belarusian security forces conducted over a dozen raids on independent media outlets, human rights organisations, and think tanks. Most recently, the homes of several staff members of the independent news agency BelaPAN were searched on 18 August, and a number of their employees taken into custody for questioning. They also launched legal proceedings to liquidate dozens of organisations that work on a wide array of issues ranging from freedom of expression to disability rights to providing assistance to senior citizens.

On 9 August, the Belarus Supreme Court dissolved the Belarusian PEN Centre, one of the country’s most prominent champions of free expression and cultural freedom, and whose president is the Nobel prize-winning writer Svetlana Alexievich.

On 27 August, the Belarus Supreme Court will hold a hearing on the dissolution of another prominent freedom of expression organisation, BAJ. For over 25 years, BAJ and its membership of over 1,300 media workers has promoted freedom of expression and independent journalism in Belarus, facilitating the exercise of civil, social, and cultural rights.

BAJ and the Belarusian PEN Centre are among dozens of organisations targeted for liquidation, with others including environmental and heritage protection groups, the Office for the Rights of Disabled People, the National Youth Council, the Belarus Press Club, organisations focusing on gender rights, and groups that support older people.

The authorities’ use of the courts to crush its critics is cynical but unsurprising – a report published last year by Anaïs Marin, UN Special Rapporteur on the human rights situation in Belarus, highlighted that “For almost three decades, Belarus has failed to ensure the independence of its judiciary, implying that the rule of law remains unguaranteed, and human rights unprotected.”

President Aliaksandr Lukašenka has openly acknowledged that “a purge is underway”, smearing the groups affected as “gangsters and foreign agents.”

These steps amount to a serious escalation of the Belarus authorities’ efforts to constrict civic space, silence critics, and deny the Belarusian people their democratic aspirations, as well as access to reliable information about the human rights violations being perpetrated by their own government since the fraudulent election just over a year ago.

We call on the Belarusian authorities to end their crackdown on civic society and immediately reverse the dissolution of NGOs and professional organisations that play an essential role in enabling Belarusian citizens to exercise their civic, cultural, economic, and political human rights.

Further, we reiterate our demand for the unconditional, immediate release of all detained journalists, activists, cultural and human rights defenders, and for an end to all harassment, detentions, and assaults directed against them.

At this critical juncture, the international community needs to urgently show solidarity with all Belarusian individuals and organisations struggling for their basic human rights, often at great cost to their own lives and livelihoods.

The government’s escalating crackdown must be met with intensified international efforts to pressure the Lukašenka administration to change course and respect the human rights of the Belarusian people.

Accordingly, we call on the international community to: