European Economic and Social Committee: Media freedom must urgently be enforced across the EU 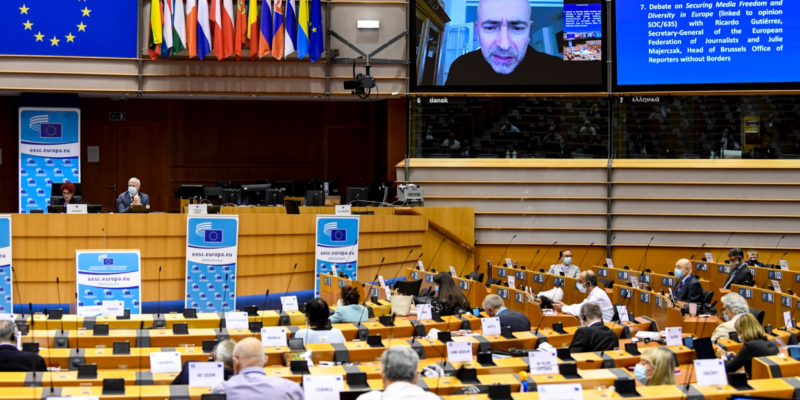 In a plenary debate, the European Economic and Social Committee (EESC) asserted its commitment to supporting press freedom, the safety of journalists and media pluralism against the backdrop of increasing attacks across the EU. The European Federation of Journalists (EFJ) and Reporters without Borders (RSF) held interventions to inform about the hostile environment where 16 journalists were murdered since 2015 and impunity largely prevails. The linked opinion SOC/635Securing media freedom and diversity in Europe was adopted, calling on the Commission to apply rules of budget conditionality and impose sanctions on Member States where European values including the rule of law are disregarded.

The EESC is an EU advisory body comprising representatives of workers’ and employers’ organisations and other interest groups. It acts as a bridge between the EU’s decision-making institutions and EU citizens by issuing opinions to the European Commission, the Council of the EU and the European Parliament.

On 22 September, the EESC convened to discuss the urgent steps needed to preserve media freedom and media plurality and ways to enforce that all Member States adopt the necessary measures. Ricardo Gutiérrez, EFJ General Secretary, and Julie Majerczak, the head of the RSF Brussels Office, joined the debate to support the opinion. They further emphasised the importance of a mechanism to thoroughly monitor significant action of Member States regarding the recommendations on journalists’ safety, a strong Media Freedom Act and a legal ban on SLAPPs.

The EESC President, Christa Schweng, opened the debate by saying that this discussion is timely since the media sector is facing profound transformations: Poor pay, changing business structures, media ownership concentration, decreasing independence, mounting disinformation and hate speech on social networks are only some examples.

Rapporteur Christian Moos said clearly: Member States that stifle media freedom must be excluded from Next Generation EU. The regulation on conditionality must be applied. Hungary and Poland are actively destroying or have already destroyed media freedom. Their governments must restore democracy and the rule of law, otherwise, they cannot remain members in the EU, which legally guarantees democracy and the rule of law and, as an indispensable prerequisite for both, media freedom.

Ricardo Gutiérrez assured that the overall tone of the opinion by Christian Moosis in line with the EFJ mission and its slogan “Journalism is a public good”. However, he highlighted that the rhetoric of picking out some Member States concerning press freedom problems can be “disempowering”: Based on the data of the Council of Europe platform or the Media Freedom Rapid Response monitoring tools, it is clear that press freedom is under threat everywhere across Europe.

Further, Gutiérrez called on the Commission to consult journalists’ representative organisations in the drafting of the EU Media Freedom Act and to establish a procedure for evaluating the Member States’ implementation of the recommendations to protect journalists.

We – journalists – need the support of civil society in the same way that we need water, because we are allies. Like you, we are defending the cause of democracy. The Parliament and the Commission are taking commendable initiatives but they are not doing enough. They need to go further, especially given the passive attitude of some Member States, Gutiérrez stressed.

#EESCPlenary: @JulieMajerczak said: “Today’s opinion is coming at a decisive juncture in time. Freedom of the media is not an optional add-on, it’s the backbone of our #democracy.” @EESC_SOC

Based on the opinion and the interventions, Christa Schweng concluded that the following steps must be taken to counteract escalating attacks, limitations to and pressures on the media and journalists:

Regarding the next steps, media freedom will be on the main agenda again in the upcoming conference on fundamental rights and the rule of law on 4 November, where the EFJ and RSF will be invited again.