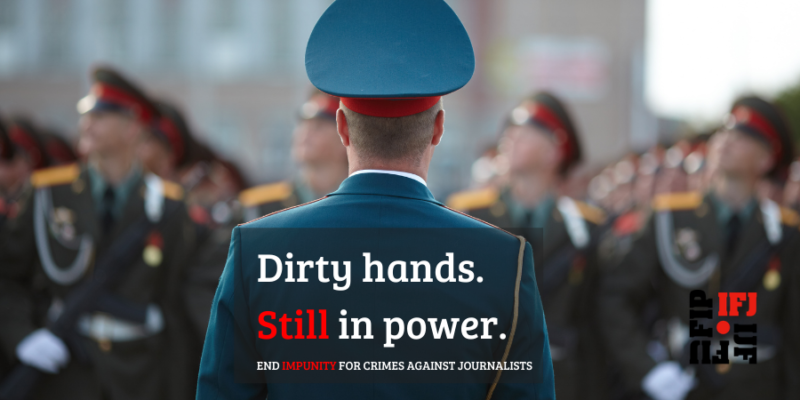 Monday 2 November is the UN International Day for the end of impunity for crimes against journalists. #EndImpunity. The European Federation of Journalists (EFJ) joined the IFJ Campaign: End Impunity 2020, to demand governments put an end to impunity and to highlight and denounce crimes targeting journalists that remain unpunished while the masterminds walk free.

This year, the IFJ is putting a specific emphasis on five countries, including Russia in Europe.

Since 2005, 17 journalists have been killed in Russia. Six murders remain unsolved:

The Russian Union of Journalists (RUJ) has developed a database of violations of the rights of journalists in Russia – protectmedia.org, with the help of which the union tracks all crimes and journalists’ rights’ violations – “one of the small but important steps on this path”, RUJ says.

But the situation remains grim. In 2020, the Council of Europe’s Platform for the Protection of Journalism and Safety of Journalists registered 15 violations of press freedom in Russia, among them death threats, arrests, beatings and assaults. The Russian authorities have not responded to any of these alerts.

On 2 October 2020, Russian news editor Irina Slavina set herself on fire in front of the police headquarters in Nizhniy Novgorod in Western Russia. She died at the scene. Before setting herself on fire, Slavina published a post on Facebook which stated: “For my death, please blame the Russian Federation.”

One day before her self-immolation, Slavina reported that police raided her flat searching for material related to the pro-democracy group Open Russia. Slavina had faced years of harassment by Russian authorities for her work reporting on the pro-opposition movement and organizing marches, according to news reports.

Another alarming incident that must be investigated is the attack against  journalist and photographer  David Frenkel who was assaulted and seriously injured by policemen while covering voting for a constitutional amendment at a polling station in St. Petersburg on 2 July 2020.

Russian President Putin signed a controversial law in December 2019 which allows classifying freelancers working for foreign funded media outlets as “foreign agents”. Subsequently, they have to adhere to strict registration rules and can be fined up to approximately 1600 US dollars or be detained for up to 15 days for repeated violations.

In July 2020, former journalist Ivan Safronov who currently works as an adviser to the head of the Russian space agency was arrested on charges of “treason” for allegedly sharing state secrets during his previous journalistic work. To date (21 October) he remains in jail.

Radio journalist Svetlana Prokopyeva was fined 500,000 rubles (around 6.000€) in July 2020 for allegedly “justifying terrorism” in a column she wrote about a suicide attack on the federal security service (FSB) in 2018.

RUJ Executive Secretary and International Director, Tim Shafir, said: “Journalists remain at the forefront of the fight against crime, corruption and violations of the law. Their labour and social rights are still under threat, many of the grave crimes against our colleagues are not fully investigated, the criminals are not brought to justice. Together with fraternal unions from the International Federations, RUJ is making every possible effort to ensure that the journalist profession is not only respected, socially significant, but also safe. We continue our daily struggle for the safety of our colleagues and to end violence against journalists, to end impunity.”

IFJ and EFJ call on citizens, journalists and journalists’ organisations to take action to #EndImpunity:

Denounce the state of impunity in Russia by sending a letter to the Russian government.

In addition to the IFJ campaign, the EFJ welcomes the mobilisation of its affiliates against impunity in Europe.

In Italy, from the afternoon of Sunday 1 November until the morning of 3 November, the names of 80 murdered journalists whose perpetrators or instigators have not yet been identified will be screened on the façade of the headquarters of the public radio and television station (RAI) in Rome, as proposed by Usigrai, with the full support of the FNSI, the Threatened Reporters Committee of the Anti-Mafia Commission and the EFJ.

In particular, the names of the 38 journalists whose murders are officially considered as cases of impunity by the Council of Europe Platform will be projected on the façade of the RAI headquarters: