ETUC demands the Russian authorities to end the intimidation of journalists 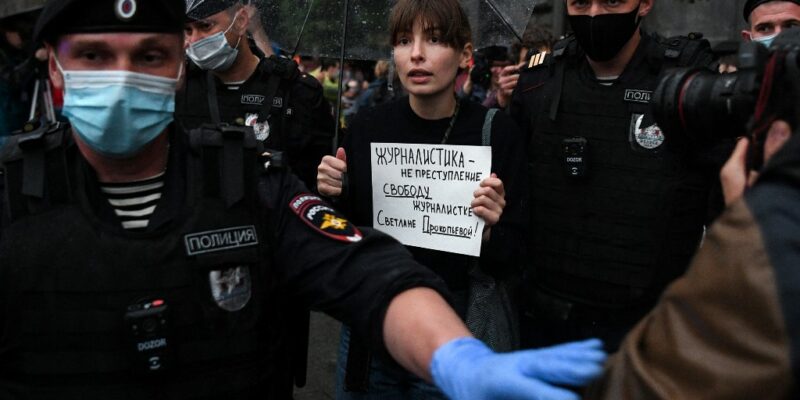 The Executive Committee of the European Trade Union Confederation (ETUC), where the European Federation of Journalists (EFJ) was represented, adopted a new resolution on Monday condemning the repression of protesters and journalists in Russia. The ETUC demands the Russian authorities “to end the intimidation of protesters, who are peacefully expressing their opinions, and of journalists, who are just doing their jobs.”

The ETUC is seriously concerned about the Russian government’s lack of respect of fundamental freedoms, following the harsh repression of public protests: “The Russian authorities used force to disperse protests detaining record numbers of people, many of whom were sentenced to administrative fines and some to administrative arrest. Incidents of violence were recorded. Several investigations were initiated in connection with the protests, including investigations against dozens of independent journalists who were simply doing their jobs, reporting events as they unfolded, while searches and intimidation of protesters continued.”

The ETUC statement notes that “many of the protesters shared the same convictions, requesting the rule of law, democratic elections, freedom of media. They voiced also the same messages and calls for justice that the Russian trade unions have been reiterating for years, and repeated in the context of these events: extreme and growing inequalities, limitation of freedom of assembly, association and the right to strike, unfair wealth distribution, growing poverty and partiality of local authorities in favour of business elites.”

The ETUC expresses “its solidarity with the Russian population and working people and calls for the full respect of human rights and democratic freedoms. The ETUC also demands the Russian authorities to end the intimidation of protesters, who are peacefully expressing their opinions, and of journalists, who are just doing their jobs.”

The Russian Union of Journalists (RUJ) reported a number of cases of detention of journalists covering the protests all over the country, in January. The Journalists’ and Media Workers’ Union (JMWU) recorded 210 cases of violations of media freedom in Russia in January and February (detentions, violence, intimidation…). JMWU called on the Russian judicial authorities to investigate these massive violations of press freedom by employees of the Ministry of Internal Affairs and the National Guard. So far, the Russian judiciary has refused to consider these complaints on the grounds that the journalists were participating in “unauthorised demonstrations”. The EFJ condemns this abusive interpretation and joins ETUC in denouncing the repeated violations of fundamental freedoms in Russia.