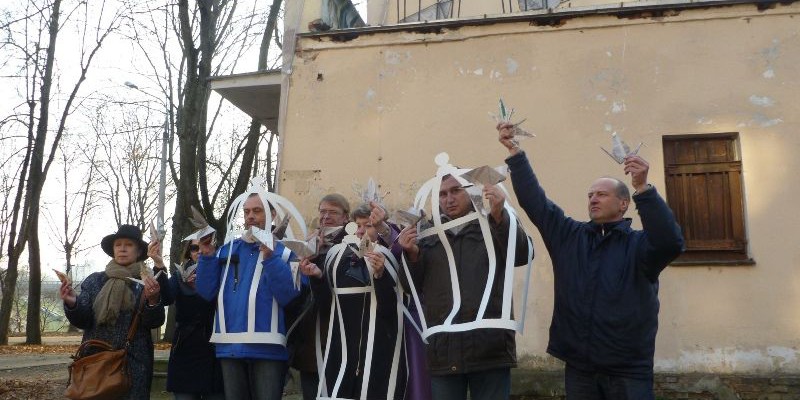 According to the open letter published by BAJ calling for the charges to be dropped, seven of its members took a photo in front of a famous graffiti in Vitebsk with some paper-cut birds flying out of a paper cages. Their symbolic action was designed to mark the EFJ Stand Up For Journalism Day on 5 November, which was established in 2007 to stand up for journalism as a public good, to promote press freedom and journalists‘ rights. BAJ says that at least three of the participants have been summoned to the Chyhunachny district police department of Vitebsk, accused of taking part in an unauthorised action, in breach of „art. 23.24 of the Code of Administrative Offences.“ They are expected to appear in court on 28 November and 1December.

The photo session was held in a practically deserted place, far from the city center, and permission was not required, according to BAJ. The association says the photo session is not regarded as a mass action under Law on Mass Actions, contrary to what the police are claiming.

“The participants of the photo session disagree with such arbitrary interpretation of the law and so does BAJ”, says the open letter, highlighting that the accusation is “absurd”.

Both IFJ and EFJ condemn the police charges, saying they raise further concerns over press freedom in Belarus, a country with a poor record of respect for journalists‘ rights.

“This kind of actions sadly reminds us of the importance of keeping campaigns such as Stand Up For Journalism, to support journalists prosecuted for their professional activities but also to urge governments to respect these workers’ rights in their search for truth,” says EFJ President Mogens Blicher Bjerregård. “We back our colleagues from Belarus and urge the national authorities to drop the charges against them immediately,” added IFJ Deputy General Secretary, Anthony Bellanger.