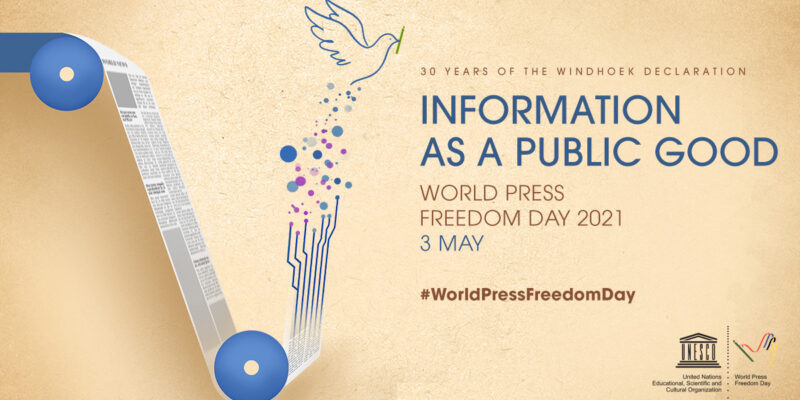 On World Press Freedom Day (WPFD) on Monday 3 May, the European Federation of Journalists (EFJ) has stressed the need for concrete actions from European governments to defend and protect media freedom. 69 journalists are currently in prison in Europe, just for doing their job. The EFJ calls on states to fulfil their commitments and obligations to protect journalists and media independence and pluralism.

The recent report by the Council of Europe’s Platform for the Protection of Journalism shows a worrying deterioration in the working conditions of journalists across Europe: more than 200 serious press freedom violations were recorded in the 47 member states of the Council of Europe in 2020. Two journalists lost their lives last year, in Russia and Albania. And two more have already been murdered in the first four months of 2021, in Turkey and Greece.

During the Covid-19 pandemic, governments across Europe adopted emergency laws and regulations that also imposed extraordinary restrictions on journalists’ activities. In addition, journalists are increasingly working in a hostile environment: in 2020, a record number of alerts submitted to the Council of Europe Platform concerned physical attacks (52 cases) and harassment or intimidation (70 cases).

The EFJ calls on the European governments:

“Most European countries are not living up to their international commitments to protect press freedom,” the EFJ President Mogens Blicher Bjerregård said today. “They are failing in their duty to provide citizens with access to free, independent and pluralistic information. Violations of press freedom are on the increase and the international community remains dangerously passive. It is high time for action.”

“The situation is particularly worrying in Belarus,” added EFJ Director Renate Schroeder. “We once again call on all European governments to mobilise intergovernmental organisations to put an end to the repression of the Lukashenko dictatorship. To remain passive is to be complicit in the regime’s atrocities.”