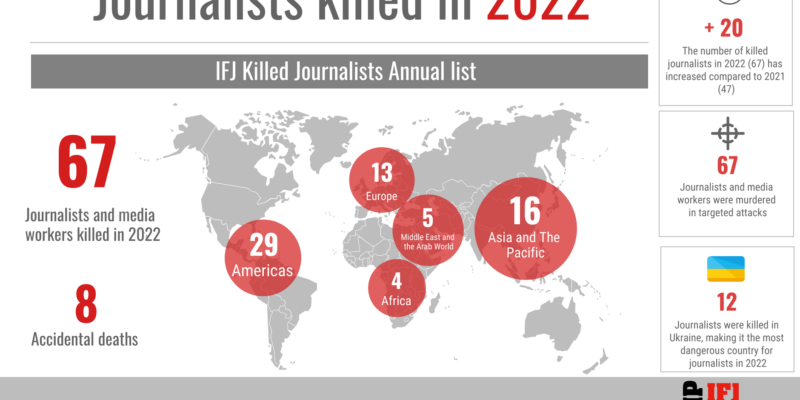 The International Federation of Journalists (IFJ) today renewed its call on the international community for concrete action to protect the safety and freedoms of journalists as it recorded a spike in the numbers of journalists killed or imprisoned during 2022. The vote on the IFJ Convention on the Safety and Independence of Journalists by the UN General Assembly has become urgent. The IFJ released the latest figures ahead of International Human Rights Day, recording 67 killings of journalists and media staff in the line of duty in 2022 (including 13 in Europe) compared to 47 last year – a reversal of the decline recorded in recent years.

The war in Ukraine accounts for 12 media fatalities, the highest number in the 21 countries where deadly incidents have been recorded. But the rule by terror of criminal organisations in Mexico, and the breakdown of law and order in Haiti, have also contributed to the surge in killings, with 11 and 6 documented respectively.

This year the IFJ recorded more cases of journalists killed in Europe (13) than in the Middle East and Arab World (5) and Africa (4).

“The surge in the killings of journalists and other media workers is a grave cause of concern and yet another wake up call for governments across the globe to take action in the defence of journalism, one of the key pillars of democracy,” said IFJ General Secretary Anthony Bellanger. “The failure to act will only embolden those who seek to suppress the free flow of information and undermine the ability of people to hold their leaders to account, including in ensuring that those with power and influence do not stand in the way of open and inclusive societies. It is now time for the UN General Assembly to pass the IFJ Convention on the Safety and Independence of Journalists.”

“We call on European states to adopt the IFJ Convention on the Safety and Independence of Journalists, but we also call on them to implement without delay the concrete provisions set out in Council of Europe Recommendation 2016/4 on the protection of journalism. Journalism is in danger in Europe and it is high time for states to take the steps they have committed to take,” added EFJ General Secretary Ricardo Gutiérrez.

The IFJ’s list also shows that political repression has reared its ugly head during 2022 from China to Belarus, and from Egypt to Hong Kong, Iran, Myanmar, Turkey and Russia in a bid to silence media and crush protests for freedom. Journalists have been among the first victims of the crackdowns with at least 375 journalists and media workers currently behind bars (including 124 in Europe), a new high since two years ago when the IFJ began publishing lists of jailed journalists to mark the International Day for Human Rights.