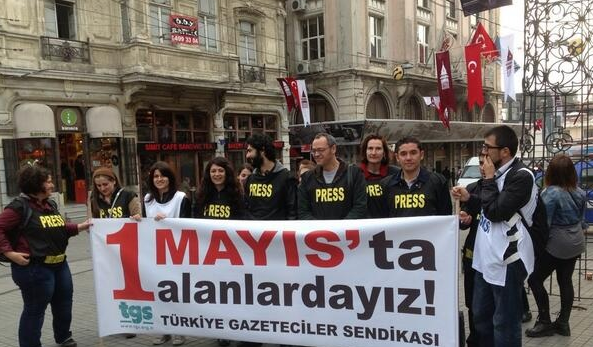 
(26-27.04.2014) The European Federation of Journalists (EFJ) and its affiliate in Turkey, the Journalists Union of Turkey (TGS for Türkiye Gazeteciler Sendikasi), organised the first workshop for a two-year project called “Press Freedom and Empowering the Journalists Trade Union Movement in Turkey”. The project is funded by the EIDHR (European Instrument for Democracy and Human Rights) of the European Commission.

The workshop covered the issues on union capacity-building, recruitment strategies, legal assistance and the TGS-EFJ campaign for the freedom of imprisoned journalists. The workshop also discussed the preparation of a major international conference for 2016.

Renate Schroeder (EFJ Director) and Mehmet Koksal (EFJ Project Officer) also visited an opposition newspaper Karsi Direnis, occupied by over 50 journalists who were fired without prior notice and payment for their work in the past few months. A panel discussion on social rights, resistance movements and press future in Turkey took place at the newspaper headquarter in Zeytinburnu (Istanbul) with the participation of writers, columnists, unionists and EFJ representatives. The EFJ also participated in a protest organised by the TGS responding to government ban on demonstrations in Taksim square on 1 May. The TGS, together with the EFJ, reminded journalists about their rights and duties to report on the demonstrations and demanded the police to respect their rights and restrain from using violence against journalists. New campaign materials were distributed to journalists covering the upcoming 1 May demonstrations at Taksim square (Istanbul).