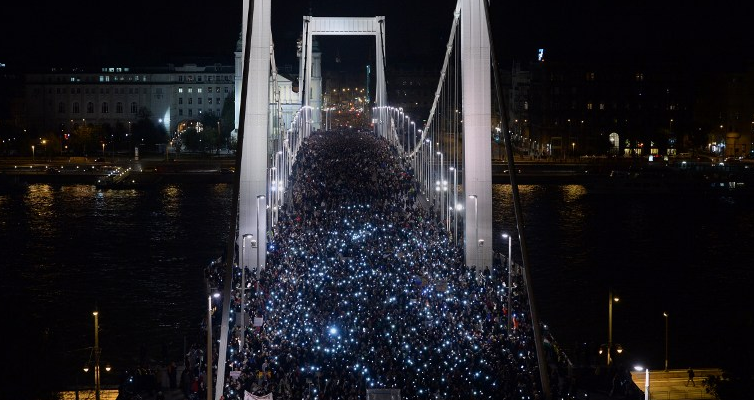 
The European Federation of Journalists (EFJ) has called on Prime Minister Viktor Orban to abandon his “anti-democratic plan” to tax internet use and to start listening to his people and understand the reality of the developments in the media.

“It is very unwise and unrealistic of Orban’s government to think that the internet tax is of any relevance in today’s digital age,” said Mogens Blicher Bjerrregård, EFJ President. “This is evident from the tens of thousands protesters who showed up on Tuesday night’s protest.”

According to the organiser of the protest, following the first rally on Sunday 26 October, the second rally on Tuesday 28 October has gathered around 100,000 protesters while some reported 10,000 protesters. The EFJ affiliate, the Hungarian Journalists’ Union also supported and participated in the protest demanding the government to withdraw the plan on internet tax.

The original draft law would have imposed a tax on any internet data transfer at a rate of 150 forints (€0.48) per gigabyte. According to the latest version of the draft, internet service providers would be required to pay 700 forints (€2.27) per individual subscriber and 5,000 forints (€16.19) per business subscriber every month to the government. This cost will ultimately be passed on to the citizens.

“It seems that the real purpose of such a policy is to prevent citizens from having access to information and to limit media freedom in the country,” warned Blicher Bjerrregård.

The European Commission also criticised the internet tax saying that “it [the tax] is a terrible idea“. Ryan Heath, spokesman of the outgoing EU Digital Agenda Commissioner, Neelie Kroes, said, “It is part of a troubling pattern… of actions which have limited freedoms or sought to take rents without achieving a wider economic or social interest.“