#EFJAM: „to portray the truth with our pen“ 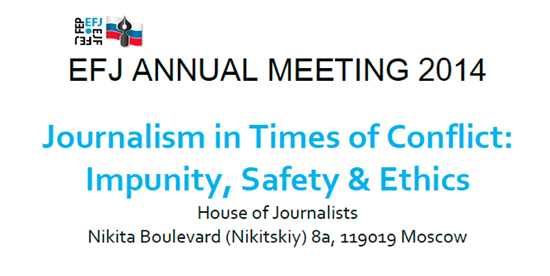 
Our job is neither to please nor to harm anyone; our job is to portray the truth with our pen …

What Albert Londres, a French journalist and one of the founding father of investigative journalism, said has captured the spirit of the Annual Meeting of the European Federation of Journalist which will be held  at the House of Journalist in Moscow this Friday 21 and Saturday 22 of November.

While the International Federation for Human Rights (FIDH) held its last World Congress in Istanbul, the EFJ will hold its Annual Meeting in the capital of Russia. The goal is to portray the truth with our pen.

Some 55 delegates from 28 countries representing trade union organizations and professional associations of journalists will be participating in the event.

Dunja Mijatovic, the OSCE Representative on Freedom of the Media, will deliver the keynote speech. Yannis Kotsifos, member of the EFJ Steering Committee, will make a report about the EFJ recent mission in Kiev about the hostile situation for journalists in Ukraine. The EFJ will also make the voice of Ukrainian journalists heard at the EFJ Annual Meeting in Moscow.

EFJ will also show solidarity with Russian journalists who are fighting in extremely difficult conditions for the freedom of the press, especially those working at Novaya Gazeta, Dozhd TV, Echo Moscow and Meduza.

For more details about the EFJ Annual Meeting, you can download the Agenda.