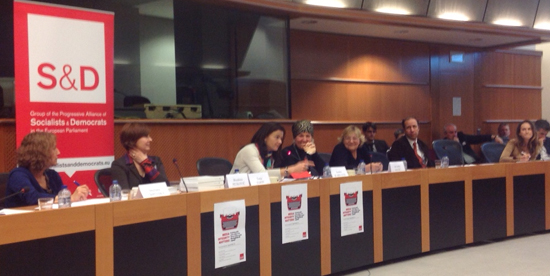 
On 18/11/2014, a conference entitled „Media Integrity Matters – Reclaiming public service values in the Western Balkans media: How should the European Union Respond ?“ has been organized in Brussels by MEP Tanja Fajon. The event was a follow-up to the publication of the book “Media integrity matters“ in June 2014, comprising the research conducted in Albania, Bosnia and Herzegovina, Croatia, Macedonia and Serbia. The study aims at addressing the obstacles to a democratic development of media systems in the countries of South East Europe/Western Balkans by pointing out corrupt relations and practices in media policy, media ownership and financing, public broadcasting and journalism as a profession. The European Federation of Journalistes (EFJ) has been invited to make a speech and share the views of its affiliates during the conference.

During the conference at the European Parliament, MEP Tanja Fajon focused her intervention on „how should the EU respond so that fundamental rights for freedom of expression and freedom of the media is respected in both EU and applicant countries“. In the past, an European Parliament Intergroup on media used discussed issues around media and journalism. There is no longer such an Intergroup but the situation has not improved also as a consequence of the economic crisis in 2008. The European Parliament devotes today a lot of discussions around media issues. The state of the media has tremendously worsened since the crisis in 2008 and countries such as Hungary or Greece are just the most quoted examples. The new book Media Integrity Matters deals with South East European countries.

Brankica Petkovic outlined the role and tasks of the South East European Media Observatory (SEEMO) which is supported by the European Union. Among other, it helps to distribute EU awards to investigative journalists in acceding countries.

Not only media ownership matters ijn the region but a larger system of corrupt relations with media, politics and economics are also affecting the profession. Journalists are degraded from public service operators. This issue must be addressed in a systematic way, media and journalism must be put in the center of public service, according to the authors. The complete lack of media integrity is less a consequence of lacking media regulation or policy but more of the lack of will of economic and political actors. The public service broadcasting (PSB) remains the media most exposed to political interests. PSB management and funding was in the focus of the recent research. There are laws about PSB but they are designed to keep it as a hostage of governments. For example, Serbian and Croatian public services are showing huge economic losses.

Journalists became servants of businessmen and economically reduced to precarious workers with salaries often lower than the average salary in the countries. There are hundreds of unemployed journalists in South East European countries and the situation is being exploited by media managers. Journalists are regularly threatened, accused and attacked. There is not enough organised resistance from the part of the journalists.

The answer to this dramatic situation must include coordinated action of many actors with financial and political support of the European Union. Jovanka Matic (Serbia) reminded that recent changes in media law give some hope for change but many problems remain the same. The strongest driving force of media reform was process of access to EU. The EU should continue that way but be coherent and not make trade offs with national governments on other policies. Media freedoms very often are sacrificed as being seen less important.

There are 8 different types of ownership patterns, according to the study. But none of them proved to be successful. Journalists and civil society ownership, of which there are very few, however are the most suitable to fit in public service role. These types of ownership should be helped with financial supports. In this crisis situation such support could help.

Snezana Trpevska (Macedonia) recalled that in beginning of the 90s media freedoms were broader under restrictive media legislation.Once legislation was fully harmonised with EU standards, both media and journalism became more dominated by other interests. Supposedly independent regulators became increasingly dependent on government. We are now watching to the fall of the concept of public interest.

Some positive trends have also been mentioned : associations and unions have been increasingly active in recent years and they have coordinated with NGO media sector.

Sandra B. Hrvatin tried to give an answer to the question why media policy failed to protect media integrity. According to her, the European Parliament should and must be a guardian of fundamental rights. „You cannot escape this role!“, she said. Corruption is also a global problem, the crisis in journalism is in fact the crisis in existing media models. Europe is not doing its job in this field. Tanja Fajon (Member of the European Parliament) got the message and has clearly indicated that she would pass it on.

During the panel discussion, a representative of Circom (European association of regional televisions) stressed the importance of public service broadcasters for the democratisation in the countries. A. Kesteris from the European Commission, DG Enlargement, reminded that the European Commission has financed this project „which reflects the EU’s far reaching intentions“. He also referred to media guidelines to be implemented in the coming period. He agrees with all the conclusions and understands the question of trade offs, but he wants to reassure that such trade offs are not an EU policy.

Renate Schroeder from the European Federation of Journalists (EFJ) congratulated the authors of the book to this appreciated project and thanked MEP Tanja Fajon for the invitation to the conference. She referred to the importance of labour rights. Schroeder stressed that without labour rights protection there is no media integrity. Factor of fear is a dominating challenge in this region. Three promising union leaders recently lost their jobs because they were trying to defend labour rights. She appreciated the guidelines by the European Commission and looked forward to working with them in the coming five years period. The European Union (EU) needs to be more courageous especially when it comes to the question of journalists in detention or affected by any sort of violence. The panel agreed with the importance of labour rights issues also in creating media integrity.

The lack of labour rights and increase of precarious journalist’ work forces is a global challenge and dilemma. „This is the way journalists are being destroyed“, said a participant.  Labour rights and unions must be sustained because today there is too much attention on the legal framework. The EU needs to support more journalism, independent media production instead of focussing only on reforms „good on paper“.